Solodev ranks as "High Performer" in the G2 Crowd Grid for WCM ahead of industry leaders. 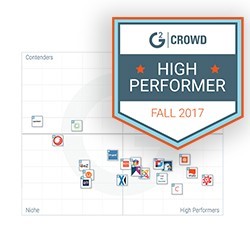 Solodev, the Web Experience Company, announced that it outranked 22 competitors in every area of satisfaction in the latest G2 Crowd Grid Report for Web Content Management. At 96 percent, the Orlando-based company earned the highest ease of use rating. Industry leader WordPress scored an 85 percent in the same category, and Sitefinity got an 81 percent.

Out of 5,700 reviews from qualified users, Solodev creators of the first Web Experience Platform built from the ground up for the AWS Cloud ranked at the top of the report for fall 2017. The company received the highest ratings around "quality of support," validating their commitment to technology, service and innovation.

The report also revealed that 97 percent of Solodev's users are "likely to recommend the WCMS to others," one of the most valuable measures of performance. These qualifications and more helped the Orlando-based company earn the "High Performer" designation, challenging industry stalwarts and disrupting the WCMS space.

"Solodev is honored to have received a top ranking on the G2 Crowd Grid. Nearly all of the report is based on user reviews, and we work diligently each day to help our users succeed," said Shawn Moore, CTO of Solodev. "We want to offer up nothing short of the highest quality product that consistently exceeds customer expectations. This recognition validates that we meet those standards for a variety of clientele. We're thrilled that reviewers would give their insights. They keep us moving toward excellence."

Moore pointed to three key features that helped Solodev thrive in the face of industry leaders like WordPress, Sitefinity and Oracle:

Solodev is built from the ground up for the AWS Cloud. By aligning with the advanced capabilities of the AWS infrastructure, businesses build their websites with Solodev in a highly-scalable environment, capable of handling diverse amounts of traffic without worrying about capacity. This allows clients to only pay for what they need and not have to guess about the future. With the AWS global footprint of redundant data centers, Solodev users create highly secure websites that include disaster recovery, high availability and unlimited storage. Additionally, Solodev is an AWS Advanced Technology Partner with competencies in Education, Government, and more.

Solodev delivers enterprise features with total design freedom and control. Built for web designers and content marketers, the Solodev Web Experience Platform allows users to create beautiful, feature-rich websites without compromising on design or being limited by rigid templates. Solodev also offers best-in-class enterprise features, with powerful backend tools for easy management, rapid development and minimal coding. Solodev is also on the forefront of WCM technology, pioneering "headless" capabilities for delivering content to nearly any device - from mobile to smartwatches to the Internet of Things. "With Solodev, people can finally make what they want today, and be ready for tomorrow," said Moore. "This incredible design control and enterprise functionality is why our customers are so satisfied with us."

Solodev is one of the few companies committed to U.S.-based, 24/7/365 support. When emergencies occur, Solodev's human support stands ready to assist from their U.S. headquarters. But they are also redefining the value of the relationship, with Solodev Certified Engineers acting like an extension of a client's internal team. This commitment to service helped garner Solodev a 98 percent rating in the "ease of doing business" category. "We have been customers of Solodev for 10 years," said Bill Sprau, Director of Creative and Digital Services for OneBlood. "They have been able to successfully keep us at the forefront and continually meet our ever-adapting needs. That is a true testament to their organization."

Every day, users around the world rely on the Solodev Web Experience Platform to:

Solodev's ranking reflects a year of significant achievements, including a win at the AWS Public Sector "City on a Cloud" competition in the Best Practices (Large category), as well as a third consecutive year on the Inc. 5000 list of Fastest Growing Companies.

A complimentary copy of the G2 Crowd Grid report is available at www.solodev.com/lp/g2-crowd.stml.